No, I’m not talking about the infamous ‘Amanda’ advert in the Scunthorpe Telegraph last week.

This weekend threatens to be crucial for the future of Aston Villa, fans of who pride themselves on supporting the Midlands’ biggest football club, with a rich history which draws very heavily on events in 1982.

Villa, managed controversially (in the eyes of many fans) by Alex McLeish, find themselves stuck in something of a relegation scrap. Depending on who you listen to in the Birmingham Mail newsroom, Villa are destined to go down (season ticket at Birmingham City optional to hold that opinion) or suffering a minor blip. The truth is probably somewhere in between, and a look at the Premier League table currently makes it likely Villa will stay up. Just.

McLeish’s appointment, given it involved him crossing from Birmingham City shortly after managing Blues to relegation, prompted protests by fans, and their patchy form has prompted frequent protests since.

And for fans (or at least those involved with the My Old Man Said site), who predicted a miserable season under McLeish, nothing says I told you so more than an advert on the back page of the Birmingham Mail:

For football fans keen to crank up the pressure on the manager they don’t want, taking out an advert on the back page of the local newspaper (and the publication which provides the most in-depth coverage of Villa every day) was a particularly smart move.

Despite this being potentially a Premier League title-deciding weekend (again), and the day of the FA Cup Final between two of the clubs which get high-national newspaper attention, the advert proved a clever way to get plenty of attention in the national press, prompting coverage in The Times, Guardian, Daily Express and Daily Mail, even though the latter seems to have got confused on which day it appeared in the Birmingham Mail:

But the Daily Mail article also stated that sub editors were involved in the creation of the advert.

Daily Mail oddities aside, in terms of getting your message across, is there a better example of the power of local newspaper advertising?

(Disclaimer: I’m digital publishing director for Trinity Mirror’s regional websites – one of which is the Birmingham Mail, the site which broke the story about three Villa players being involved in a brawl outside a nightclub last week. For McLeish, it never rains but…) 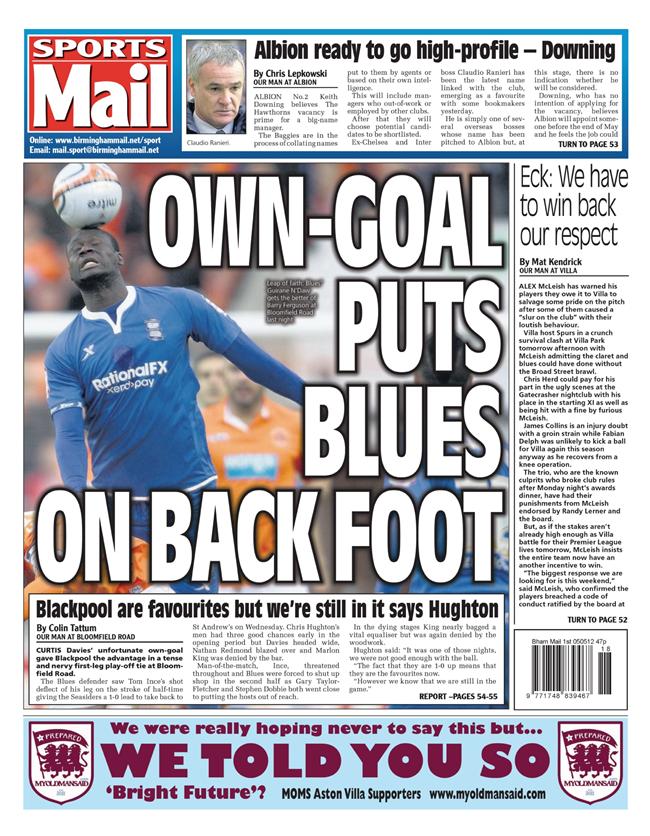 One thought on “What better way to say I told you so than by taking out a back-page advert in your local newspaper?”